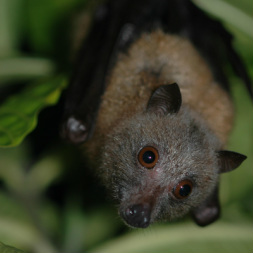 The Bat Specialist Group (BSG) is one of a number of specialist groups formed within the Species Survival Commission (SSC) of IUCN-The World Conservation Union  (IUCN).

The Species Survival Commission (SSC) Specialist Groups provide a wide range of member expertise to IUCN – The World Conservation Union - gathering information and performing species assessments for the IUCN Red List of Threatened SpeciesTM, and producing species action plans and policy guidelines.  The groups also provide information for the World Conservation Monitoring Centre, which is hosted by the United Nations Environment Programme (UNEP) and advise governments that are Party to the Convention on International Trade in Endangered Species of Wild Fauna and Flora (CITES). All are committed to reversing the extinction crisis by working to save a vast range of species (and their habitats).

The Bat Specialist Group (BSG) is a global network of bat specialists. Over 80 bat biologists and conservationists from over 50 countries have been invited to join the recently reconstituted BSG. Some countries, especially in Africa are still without a representative and this is being addressed at present. The BSG is active in many of its own initiatives, as well as focusing on the assessment of bat species’ status, compiling and distributing intelligence on particular issues of international importance, and supporting the work of its members. A central concern is to promote the dialogue among bat scientists and conservation practitioners throughout the world. The specialists have produced two global conservation action plans for Megachiropteran and Microchiropteran bats (Mickelburgh et al. 1992, Hutson et al. 2001). The Plans provide a global framework for bat protection and aim to stimulate the growing community of bat biologists and conservationists to a greater level of action.

Objectives
1. To contribute to the mission and goals of IUCN/SSC
2. To ensure the maintenance or recovery of populations of threatened bat populations
3. To ensure that other bat species remain at a favourable conservation status

Strategies
1. Provide an effective worldwide network of specialists to act for the conservation of bats
2. Maintain and encourage implementation of conservation action programmes
3. Keep IUCN Red List up-to-date (developing incorporation of wider issues in species  assessment)
4. Act for particular threats to species and their habitats
5. Work with other IUCN Commissions and other Specialist Groups to meet conservation  objectives; also with other related organizations (e.g. CMS, CITES)
6. Encourage the development of and on-going programmes of regional structure of BSG  and provide liaison between them. Encourage and support other focus groups, e.g. taxon or habitat groups (such as Pteropodidae, cave bats).
7. Provide members with information on current activities and concerns
8. Seek or support applications for funding for activities of relevance to CSG objectives
9. Lobby for improvements in conservation status of bats through national legislation,  international treaty or other appropriate measures.
10. Provide source of information and contact
11. Develop position or policy statements if appropriate

The BSG has compiled Microchiropteran Bats - Global Status Survey and Conservation Action Plan (IUCN, 2001), which can be used to develop conservation programmes at a more local/regional, habitat or species group level.

The BSG has compiled Old world fruit bats – An Action Plan for their Conservation (IUCN, 1992), which can be used to develop conservation programmes at a more local/regional, habitat or species group level. However, since many of the recommendations of this plan have been adopted, it is now in need of updating, which will be a web-based exercise since hard copies of these plans are expensive and will no longer be produced.