Ebola virus and bats; what you need to know

Bats are known reservoirs of a host of viral infections, including Ebola. However, large fruit bat colonies roosting in towns and cities, especially the Straw-coloured fruit bat (Eidolon helvum) have used such roosts for decades, if not centuries, without documented Ebola virus disease (EVD) outbreaks. These bats are very unlikely to play a major role in Ebola virus transmission, and culling/eviction programs are very short-sighted. The current EVD outbreak is spreading within the human population and no known case has been traced to contact with a bat. If anything, an eviction attempt will only succeed in dispersing bats, thereby increasing contact probability with humans.

Indeed previous eviction and culling attempts in response to disease outbreaks have backfired and actually increased transmission of rabies (Australia and Latin America) and Marburg (Uganda) viruses to humans. Culling and eviction attempts of fruit bat colonies are strongly discouraged, and exclusion of bats roosting in houses should be done in a bat-friendly way.

Bat Conservation Africa recommends that bats and their roosts be left undisturbed: don't touch them, don't evict them, don't kill them and don't eat them.

To read a more detailed statement , please visit our web site at www.batconafrica.net and/or download the full Position Statement document below: 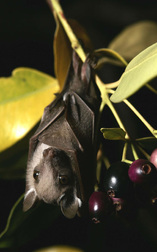 Conservation professionals from throughout Sub-Saharan Africa and a team of global bat
conservationists will come together next year to launch a bat-conservation network and begin
planning a regional strategy for future action. The first African Bat Conservation Summit will be
held February 10-16, 2013, in Naivasha, Kenya. This new network will foster collaborative training programs and assist local, national and regional leaders in establishing sustainable bat-conservation initiatives across Sub-Saharan
Africa.

Africa is home to more than 20 percent of the world’s more than 1,250 bat species, which
provide vital ecological services that benefit agriculture, forestry and public health. Despite such
amazing – and invaluable – species diversity, bats are severely threatened by the disturbance of
crucial roosts, loss of important water resources and, in some areas, by bush-meat hunting.
Needless fears and misunderstandings also contribute to persecution and eradication.

This Summit, sponsored by Bat Conservation International, can lay the foundation for a new
movement dedicated to reversing bat-population declines and increasing region-wide knowledge
and concern for species that are too often overlooked in favor of Africa’s “charismatic megafauna.”
Attendance at the Summit is by invitation only. However, it is just the first step toward a
sustained bat-conservation initiative that spans the continent. There will be many options in the
future to become an active partner in conserving the bats of Africa.
We are in the process of establishing a Facebook site and a webpage to share information with
conservationists and the public about the Summit and its results, and about becoming involved
with the new bat-conservation network. In the meantime, please visit www.batcon.org for
general information and periodic updates.
We are very excited to take this initial step toward safeguarding Africa’s bat species, and we
look forward to working together to meet the many challenges that lie ahead. 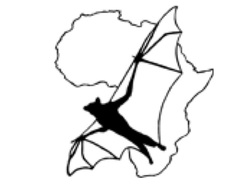 The bat fauna of Africa and surrounding islands boast about 300 species, but the distributions of many species are poorly known. Despite the crucial role of bats as pollinators and seed dispersers of plants as well as predators of insects, one-fifth of the bat species in Africa are threatened, and populations are declining due to habitat loss, disturbance and destruction of roost sites, hunting for bushmeat, land use, and pesticides. AfriBats seeks to mobilize both amateur and professional knowledge through the iNaturalist platform at www.inaturalist.org/projects/afribats. These data will be used for scientific projects and informed conservation actions, which require robust data on the distributions of bat species.

A Bat Conservation Network for Africa 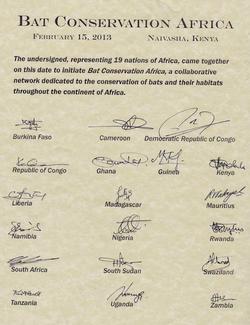 African bat researchers and conservationists joined together February 15 to create Bat Conservation Africa, an unprecedented network dedicated to conserving bats throughout the vast continent. BCA was launched by 30 bat specialists from 19 African nations during the first African Bat Conservation Summit in Naivasha, Kenya.

“There is a long list of things we need to do, but we have a very good plan and a lot of good people on our team,” said Robert Kityo of Uganda’s Makerere University. “Working together, we shall make this happen.” Kityo was elected to chair the steering committee of the new network.

During the summit at the Kenya Wildlife Service Training Institute, a dozen conservationists from the United States, Europe, Latin America and Australia shared their experiences with existing bat-conservation networks in other regions.

Bat Conservation International initiated the weeklong summit and worked with key partners to organize it. BCI provided core financing, including travel expenses for many of the delegates.

Ultimately, the network hopes to improve communication and collaboration among the dedicated but widely scattered conservationists of Africa, to identify key bat-conservation priorities and build conservation capacity throughout the continent. The immediate needs are to develop a Bat Conservation Africa website (a virtual headquarters) and an accessible list of members to enhance and continue the sharing of ideas and data that marked the summit.

Africa is home to more than 250 incredibly diverse bat species, but they face a host of threats from habitat loss to bushmeat hunting and bat populations are declining.

“This is an historic milestone, which marks a new era for bat conservation on the African continent,” said Dave Waldien, BCI Vice President of Operations and International Programs. “It is an honor to work with people so dedicated to bat conservation.”

“I am very optimistic,” Tanshi said. “Now we are going to have a much brighter future for bat conservation in Africa.”

Cage experiments in which the Malagasy endemic Rousettus madagascariensis was presented with ten fruit species (one native and the rest introduced, three of which are commercially important), showed that the bats prefer native and commercially unimportant figs (Ficus polita), rose apple (Syzigium jambos) and mountain apple (S.malaccense) to the cash crops of litchis (Litchi chinensis) and Japanese persimmon (Diospyros kaki). These important results provide a perspective on the dietary preferences of fruit bats and should be repeated on other genera of pteropodids (such as Cynopterus and Pteropus). The authors also suggest that planting Syzigium around commercial fruit trees may reduce the predation pressure of bats on such fruit.

The contents page of the issue is available Here http://www.int-res.com/articles/esr_oa/n019p019.pdf